From Urbanism to Nature
Notes from Synergy – Seascapes

Nature and travel, exploration and leisure
Seas and oceans; water and seascape
Everyday life; the city, the nature; the space

Man is a ruthless, unstoppable and determined creature who wants to gain control over nature and leave his mark on it.

‘Man undermines and hacks at Nature. He opposes himself to her, he fights with her, he digs himself in. Human order, a geometrical thing, reigns in the towns; it is the mark of great civilisations.’ – Le Corbusier

Consumerism, urban over expansion, pollution and global warming. The human relations with the natural environment are based not only on perception and pleasure but also on exploitation, waste and destruction. Where are the limits upon which the man shapes his environment? What are the boundaries between exploring nature and trying to radically transform it?

The series ‘Notes from Synergy’, is a personal reflection on the seascape of the Atlantic Ocean, through images of its rhythmically moving waters and infinite horizons. These photographs and paintings describe the seascape through minimal compositions. Images that idealise and document the sometimes gentle, sometimes violent charms of the sea. They emphasise on elemental geometries and siting while they have no evidence of human intervention.

In my work I’m exploring nature as a dynamic and interactive system. With the beliefs that the world belongs to those who explore it and the oceans are highways that connect people from every part of the world, I left the life in the city and started mapping my personal experience in the sea by living and travelling with a sailing boat that is called ‘Synergy’.

This 2-year experience was a personal contribution to the environmental sustainability which still continues on every possible mean. 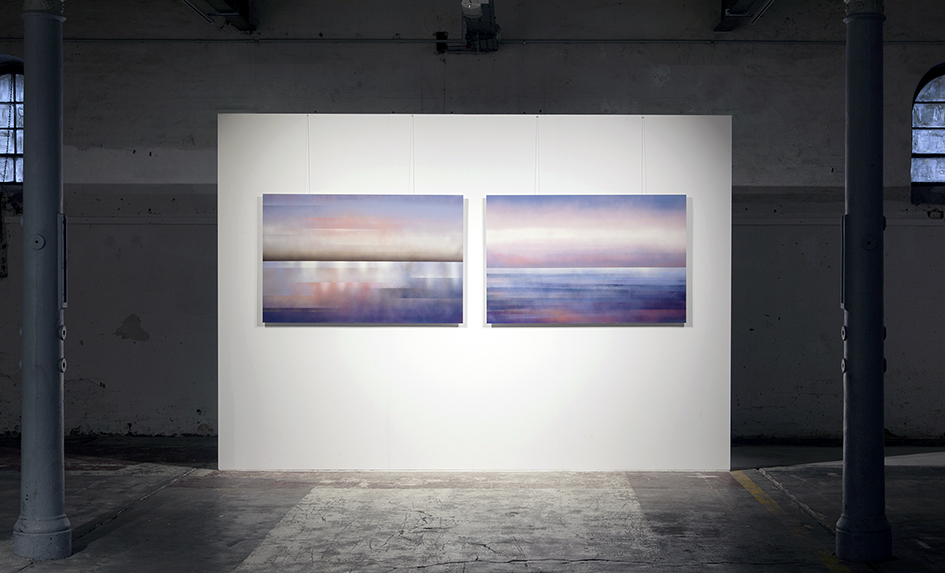 According to the ancient Greek lyric poet Pindar, the Greek hero and demigod Hercules marked the promontories at the outlet of the Mediterranean Sea as the ends of the earth. Since then, these legendary sites have been known as the “Pillars of Hercules”, one of which is associated with the Rock of Gibraltar.

But what is the world that lies beyond the Pillars o Hercules? And what does it mean to cross this border? Art is always associated with a crossing of frontiers, an adventure, a departure. An arduous and radical journey that in the end, leads the seeker back to himself?

The legendary “Pillars of Hercules” serve as an allegory for the frontier of the known world and prompt the question of what lies beyond. Crossing this border always marks a journey into the unknown. This applies in particular to art, but also to our current societal issues.

Inspired by the story of the “Pillars of Hercules”, the exhibition of the same name at the Kunstzentrum Karlskaserne brings together four artists from Greece and Germany. The exhibited works of the artists address social, political and artistic themes. A special focus of the exhibition concept is the use of art and research to delve into questions elated to urban planning, the use of urban space and self-optimisation at the workplace. In this sense the exhibition is an allegory of the current situation of many people in the world and for the universal questions on how the future should be shaped.

The Pillars of Hercules is an exhibition of works by four artists from Greece and Germany. In recent years Greece has faced a barrage of negative headlines. Reports on the refugee situation, the country’s financial crisis and the growing social unrest are the order of the day. However, what is life really look like for young artists in Greece, how has the situation in the country has affected their work, and what are the issues and ideas that move them? What does contemporary art that has been created under these circumstances look like, and what inspires the artists to create? In the exhibition, two Greek and two German artists will be displaying their works side by side, and the visitor will notice that all of them, regardless of where they are from, are basically dealing with the same question: what is it, in essence, that connects us all and holds the world together?

Notes from Synergy – Seascapes
2019
Photography, Printed Photo Collage, Spray painting on aluminium sheet
Exhibition view
Dimensions variable
Aimy Palogiannidou is showing a series of works entitled Notes from Synergy – Seascapes. The numerous atmospheric photos were taken during a long-planned trip with a sailing boat, named Synergy. The photos all share the same motifs: sky and water. The endless expanses manifest in an infinite variety of images over the course of her trip. As an escape from the excessively loud city of London into the absolute stillness and tranquillity of nature, the Notes from Synergy series symbolises a crossing of borders, both geographically and emotionally.

Aimy Palogiannidou’s printed photo collages combine images of the sea and sky at various times of the day. The photographer’s focus – just like the sailor’s – is constantly on the horizon. Only the light and colours change, reflecting the wide spectrum of nature.

In the artist’s spray paintings, she transfers her experiences from her two-year trip into the medium of painting, by abstracting them. For the observer, it is no longer possible to distinguish between a sea during sunset or a sky during sunrise.

The photographs on aluminium show snapshots of the sea, sometimes turbulent, sometimes with a smooth, mirror like surface. They are not combined like the collages or abstracted like the spray paintings, but instead portray the wonder of nature in full spectrum. The material of aluminium emphasises the photo’s silvery sheen, the sublime of the seascapes. Aimy Palogiannidou’s works are reminiscent of those of the Romantic period, when people were first depicted on canvas as wanderers or travellers gazing at a scene of mystical or powerful nature. The medium of photography had yet to be invented. Travel, exploration and making the most of one’s leisure time become a social trend. The journey was its own reward. The rapidly changing faces of nature were immortalised on canvas, making viewers tremble with joy. Those who visit the Karlskaserne exhibition will be dazzled by the brilliance of Palogiannidou’s works and feel like they are being pulled directly into nature, into the artwork itself. The horizon of the work in effect becomes the horizon of the viewers, inspiring them to contemplate their own lives and longings. 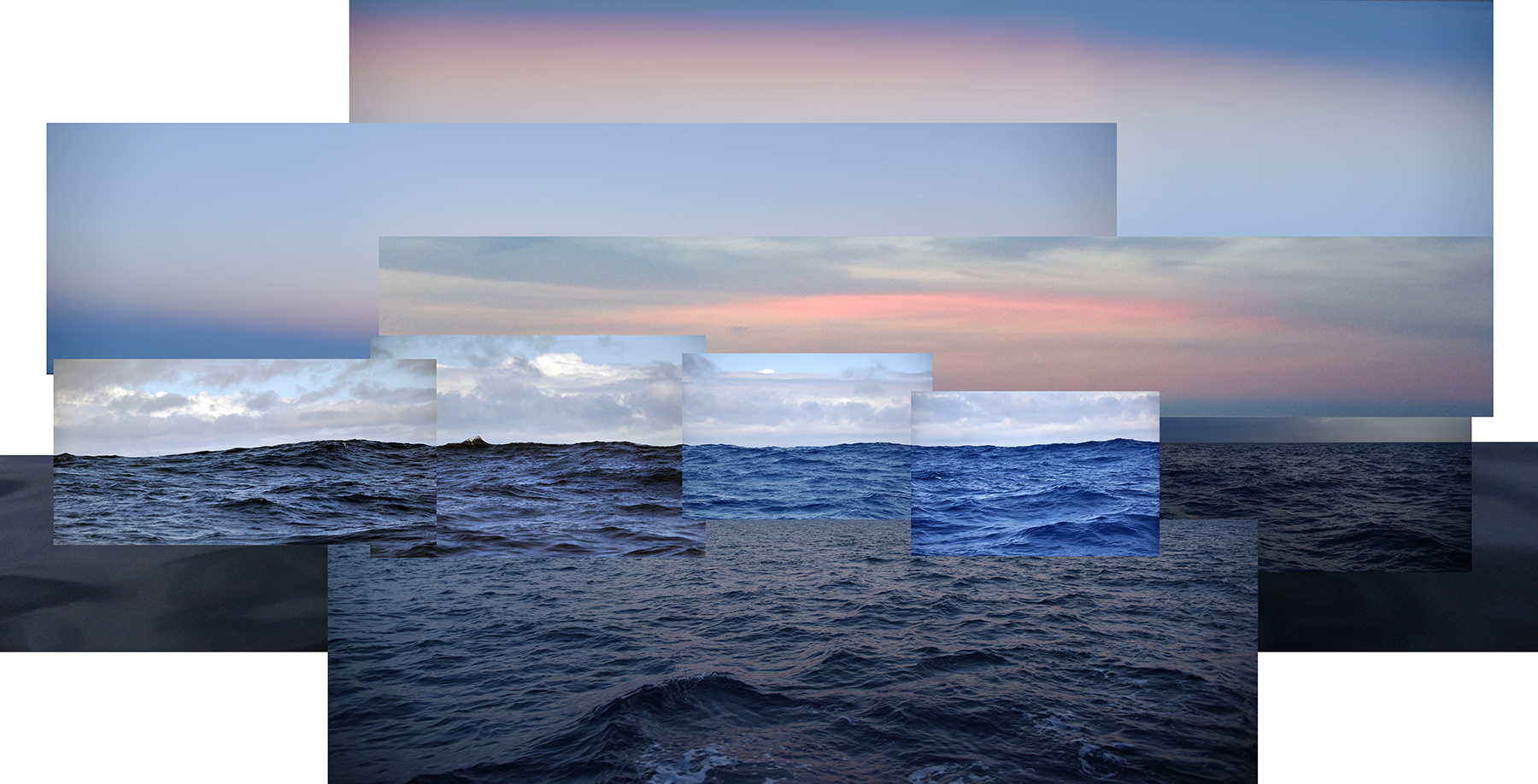 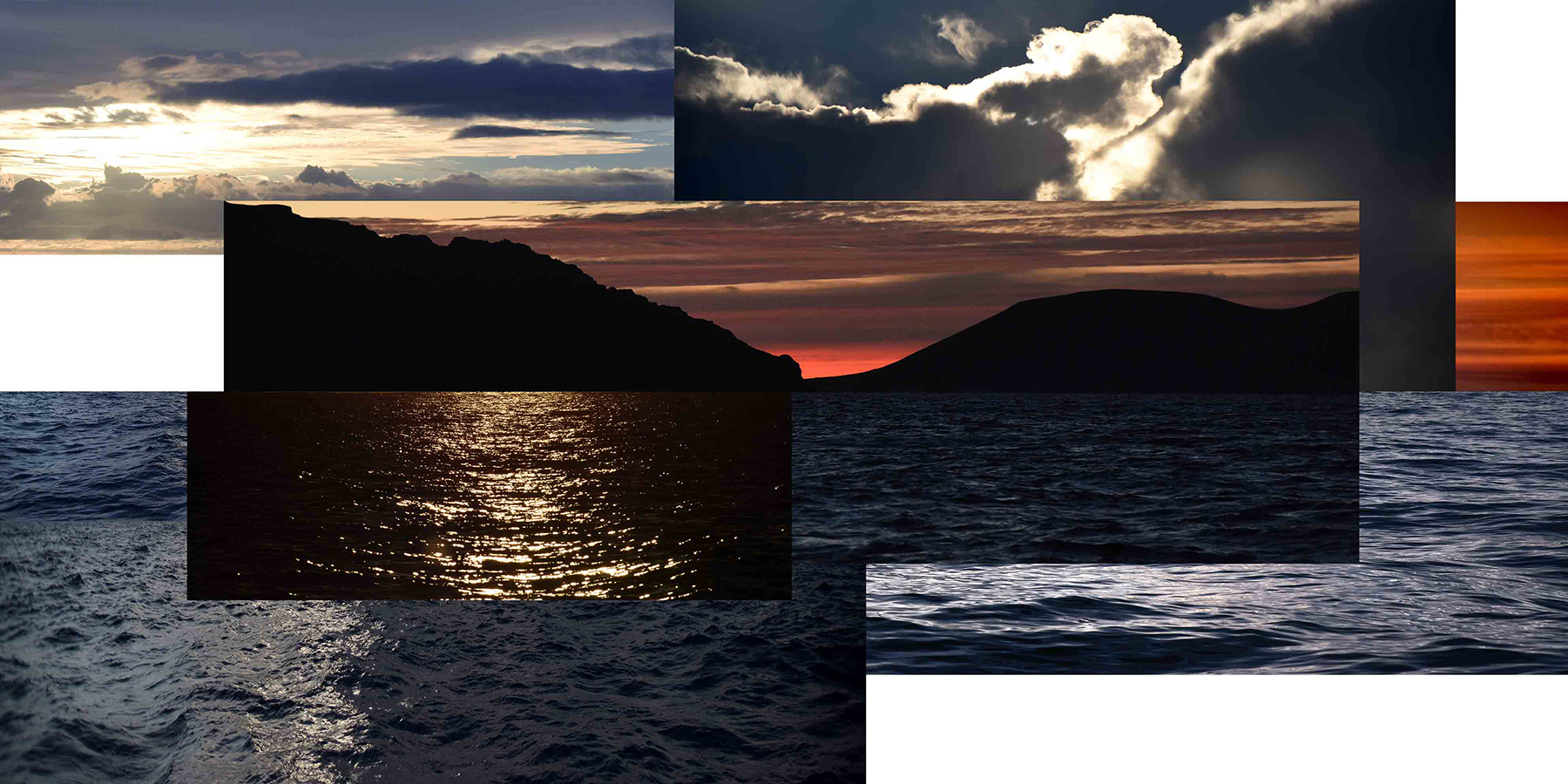